Liang Dehua was born in Hong Kong and presently resides in Thailand after relocating there with his family when he was young. He began practicing Wu style Taijiquan from his father, who had learned the style in Hong Kong. Liang Dehua started his study of Yang-style Taijiquan after meeting his first teacher, a Chinese master who was living in Thailand. His teacher later introduced him to meet and train with several masters who visited from China, including one master who taught him the old-style of Taijiquan from Yang Shaohou.

After dedicating his life to the practice of Chinese Kung-fu, Liang Dehua traveled to China to further study and train the internal arts. After spending several years in China, he expanded his knowledge of Taijiquan, Nei Gong, Qi Gong, several styles of Kung-fu, and Chinese medicine. Liang Dehua later became an indoor student of the Gu Lisheng lineage under the last indoor student of Grandmaster Gu Lisheng, Master Chi Qingsheng. Gu Li Sheng was trained under both Yang Shao Hou and Yang Cheng Fu and had the nickname as one of “Three Gu of the southwest” alongside the famous Shaolin Master Gu Ruzhang and Gu Jinzhang. In 2019 Liang Dehua was established as a 6th generation of the lineage and a representative of the school outside China.

Liang Dehua’s way of teaching is unique and highly focused on the old tradition of internal arts, particularly Yang-style Taijiquan. His lessons contain a variety of Nei Gong (internal exercise), Nei Jin (internal force), as well as a strong focus on the martial components (knowledge and applications) of the art. Since 2017, Liang Dehua has been sharing his knowledge worldwide, conducting workshops in Asia, Europe, and South America. He also began accepting several overseas students to assist him in spreading his expertise throughout the world. 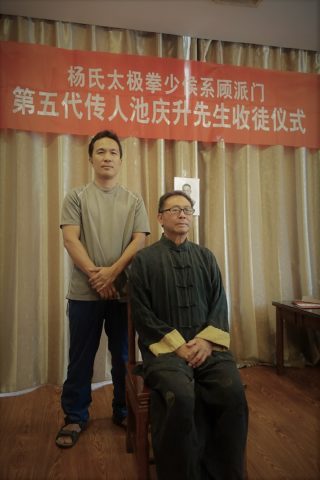