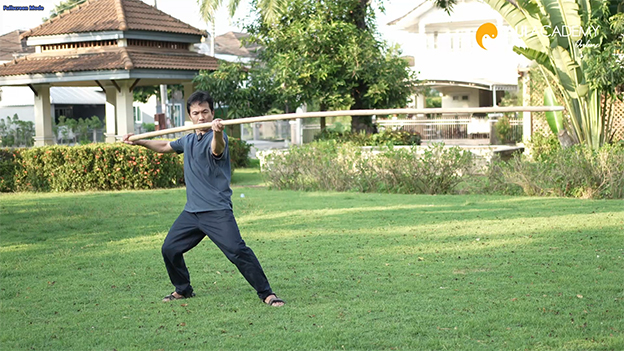 Current Status
Not Enrolled
Price
129$
Get Started
Take this Course

Yang family Taiji originally trained in both the big and small flower spears. The “big spear” set is the Taiji big spear 13 movements set, and the “little flower” spear set is the Taiji spear 24 movements set. Both spear sets were developed from the six harmonies large spear and Yang Family (Song Dynasty) Pear Blossom Spear. These original Taiji spear sets are trained in both Yang Banhou and Wu/Hao lineages.

In Li Yiyu’s handwritten manuals (Li Yiyu was a nephew of Wu Yuxiang the founder of Wu/Hao Taiji Quan), it contains the names of the 13 big spear movements as follows:

Later, the big spearhead was removed, leaving only the long pole, which was about 3 1/2 meters long. The long pole was mainly used to open, close, and for pressing and shaking for power (Gong Li) training.

The Taiji spear 24 movements used the little flower spear. It was used to train the 13 methods of Taiji spear, such as opening, closing, burst (Beng), split (Pi), and coil (Chan), etc.

It was said that when Yang Lu Chan was active in the martial art world, he liked using the little flower spear and was undefeated with this weapon. Yang Ban Hou was famous for the large spear. There was once a fire in his hometown, and he was able to use his spear to lift heavy rice bags, raising them as high as the roof. Later, the Yang Taiji spear 49 movements set was developed, consisting of all 13 Taiji sticking spear training techniques. It is the single training set preparing for the two persons set training. The 13 stick spears training is the two-person Taiji spear set, consisting of four sticking spears set, four non-sticking spears set, four trowing spears set, and one coiling set, all 13 techniques.